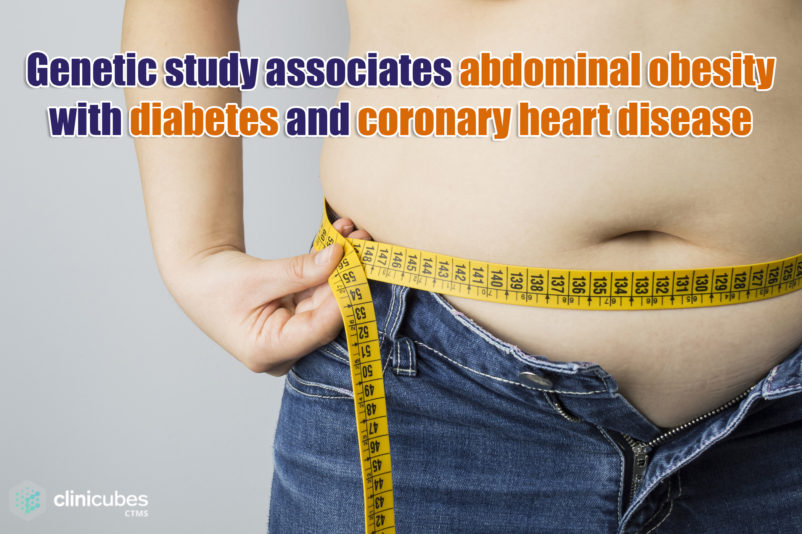 The most recently conducted genetic study signalizes that the accumulation of abdominal fat is a major risk factor for development of type 2 diabetes and coronary heart disease (CHD). In particular, the research points that individuals with a genetic predisposition to abdominal type of obesity are at greater risk of elevated triglycerides, serum glucose and arterial blood pressure. The risk factors are associated with the development of the two aforementioned conditions.

The study demonstrates that increased waist-to-hip ratio and increased body mass index (BMI) are external manifestation of the accumulation of visceral fat, which is a precondition for the development of type 2 diabetes and CHD.

Why other studies were failing to prove this linkage?

Those who were previously seeking to prove the link between the abdominal obesity and subsequent metabolic disease weren’t able to give an eloquent result due to misinterpretation of factors such as the lifestyle of patients. What would eliminate those difficulties is the disclosure of the exact mechanism, which links the genetic predisposition to accumulation of fat around the waist and increased insulin resistance.

The study was conducted between 2007 and 2015 and the researchers collected information from 322.154 patients enrolled in four genome wide-association studies as well as other 111.986 individuals whose genetic information was investigated and preserved since 2007 to 2011 in the UK Biobank. The patients have an average age of 57 years and 52.5% of them are women. They also have waist-to-hip ratio of 0.875.

The scientists developed a special genetic scoring system, which comprises of 48 single nucleotide polymorphisms (SNPs) that are associated with abdominal obesity. The Mendelian randomization analysis then showed that the presence of polygenic predisposition to fat accumulation around the waist is closely associated with an increased risk of cardiometabolic disorders, and thus greater probability for developing type 2 diabetes and coronary heart disease.

In particular, the scientists found out that any increase in the waist-to-hip ratio (WHR) with just one standard deviation, results in elevated levels of triglycerides with 27mg/dL, 4.1-mg/dL higher 2-hour glucose levels, and 2.1–mm Hg higher systolic blood-pressure levels. Speaking in percentage, based on the genetic scores, one standard deviation in WHR raised the risk of CHD by 46% and the risk of type 2 diabetes by 77%.

The study “Genetic Association of Waist-to-Hip Ratio With Cardiometabolic Traits, Type 2 Diabetes, and Coronary Heart Disease” has been conducted by Connor Emdin, D.Phil., from Harvard Medical School, Boston, Massachusetts, and colleagues, and was published in an article on Feb. 14, 2017 in Journal of the American Medical Association.

Such major clinical trial is successfully completed during long period of time due to appropriate management of data. The use of a good CTMS integrates the entire data and simplifies what has been regarded as complex. In addition, such confirmative results are benefit for the global development of new understanding for the treatment of patients with type 2 diabetes and CHD.

If you and your site haven’t adopted a clinical trial management system yet, you have now a big opportunity of trying out and implementing our Clinicubes CTMS by becoming our partner. The good results behind the conduction of any clinical study is hidden in the good management. As an effective and lightweight software, Clinicubes offers integrated solutions for every single aspect and phase of clinical trial. In its core, the CTMS is systematized, well-built and easy-to-use. Clinicubes provides with an easier way for collecting, retaining and archiving patient and scientific data. Clinical research professionals can track deadlines, schedule visitations and monitor treatment progress. The system also contributes for increasing the productivity of the clinical research site and the number of successfully completed trials.

Get in touch and take advantage of what our clinical trial management system offers.

You can find a PDF version of this article here: Abdominal obesity linked to diabetes and coronary heart disease

Beginners’ guide to CTMS for hospitals –...

Beginners’ guide to CTMS for hospitals...

How to choose a clinical trial management...

The Importance of EDC: How EDC can boost the...